The KTM 300 EXC has been at the forefront of the insane pace of development of the highest levels the sport of Extreme Enduro. This nimble, lightweight all-terrain master fears no obstacle and with the advent of TPI technology, has risen to ridiculous new heights. The new 2020 model is completely reworked and even more refined. New bodywork and ergonomics make moving around a bliss, while the reworked frame allows the rider to select a line with instant precision. An innovative and strong new 3D stamped exhaust, as well as improved cooling and suspension, all help to make the new KTM 300 EXC TPI ready for the most extreme enduro challenges.

KTM sets the benchmark in technology with its vast range of race-winning offroad competition 2-stroke models. Two years after the introduction of the world’s first 2-stroke electronically controlled fuel injection offroad models, the success story continues with completely reworked, new generation offroad competition engines, all fitted with the revolutionary TPI system. This now also includes the KTM 150 EXC which proudly adds TPI to its name and further demonstrates KTM’s unrelenting commitment to 2-stroke advancement. The benefits are clear: besides huge improvements in fuel efficiency and exhaust emissions, the system also removes the need for pre-mixing fuel and re-jetting, meaning that with less effort, the engine always runs smoothly and crisply. 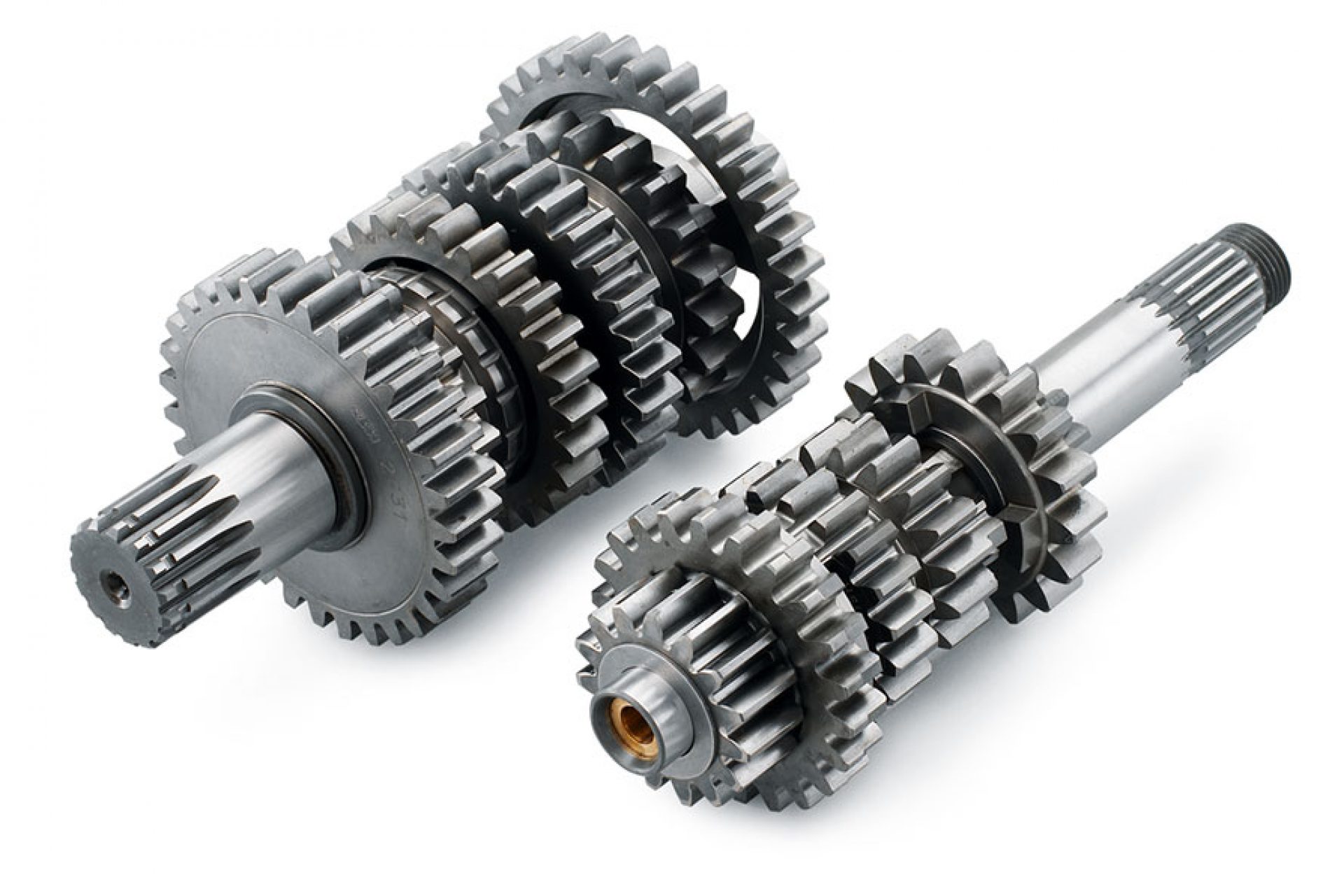 The KTM 300 EXC TPI is now fitted with a new, more robust 6-speed transmission made by PANKL RACING SYSTEMS. The gear ratios were carried over from the predecessor, but is now made of a stronger, forged raw material, ensuring the highest durability and reliability level. Another highlight of the 300 EXC TPI transmission, is […]

To accommodate the power requirements of the upgraded engine management system, the TPI models are fitted with a powerful 196 W alternator and a voltage regulator. The same as can be found on the EXC-F 4-stroke models. 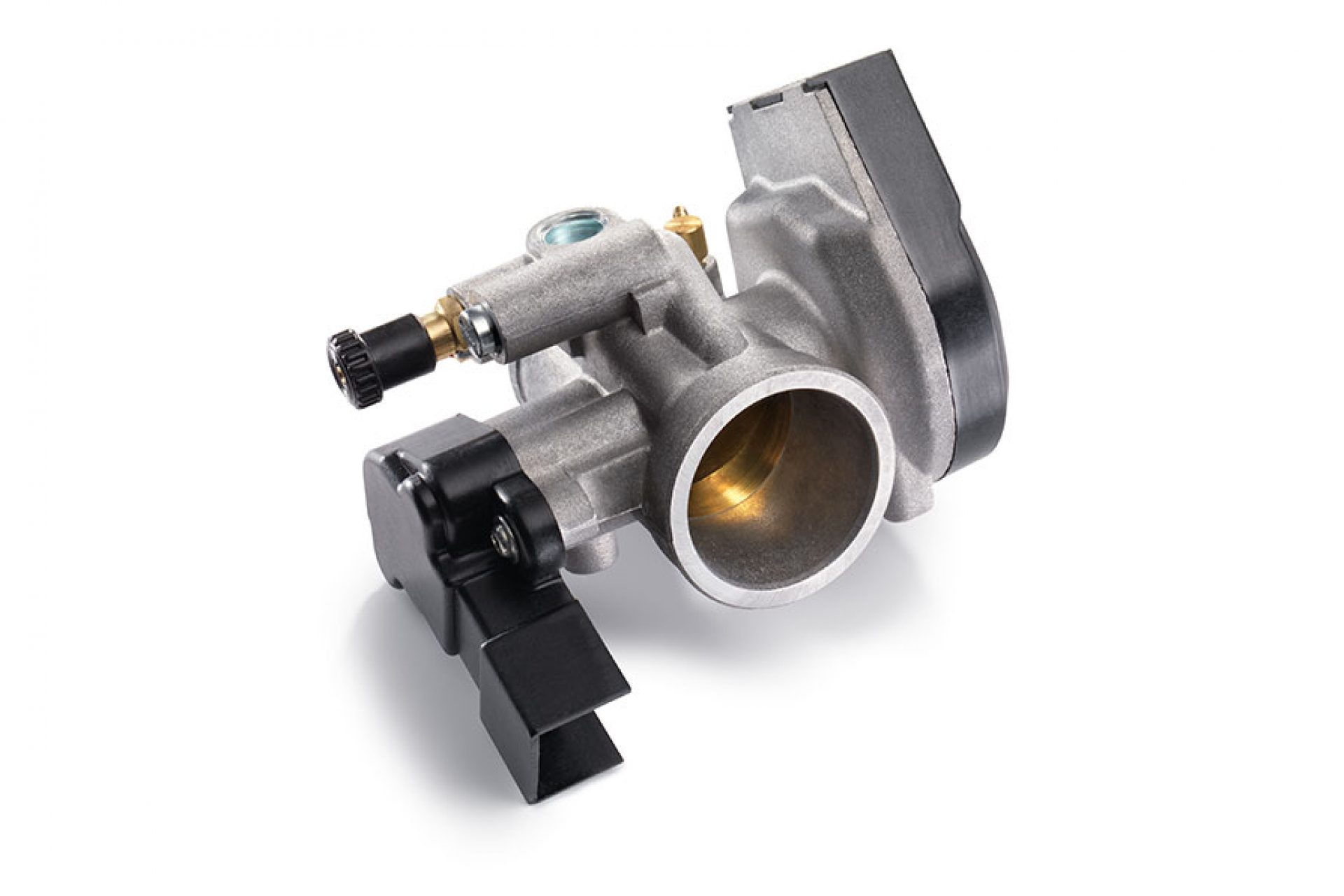 The TPI engine is fitted with a redesigned 39mm throttle body made by Dell`Orto. The airflow is regulated by a butterfly connected with a twin-cable throttle cam, which is operated by the handlebar throttle assembly. A throttle position sensor provides airflow data to the control unit. For MY20 the idle system was reworked allowing the […] 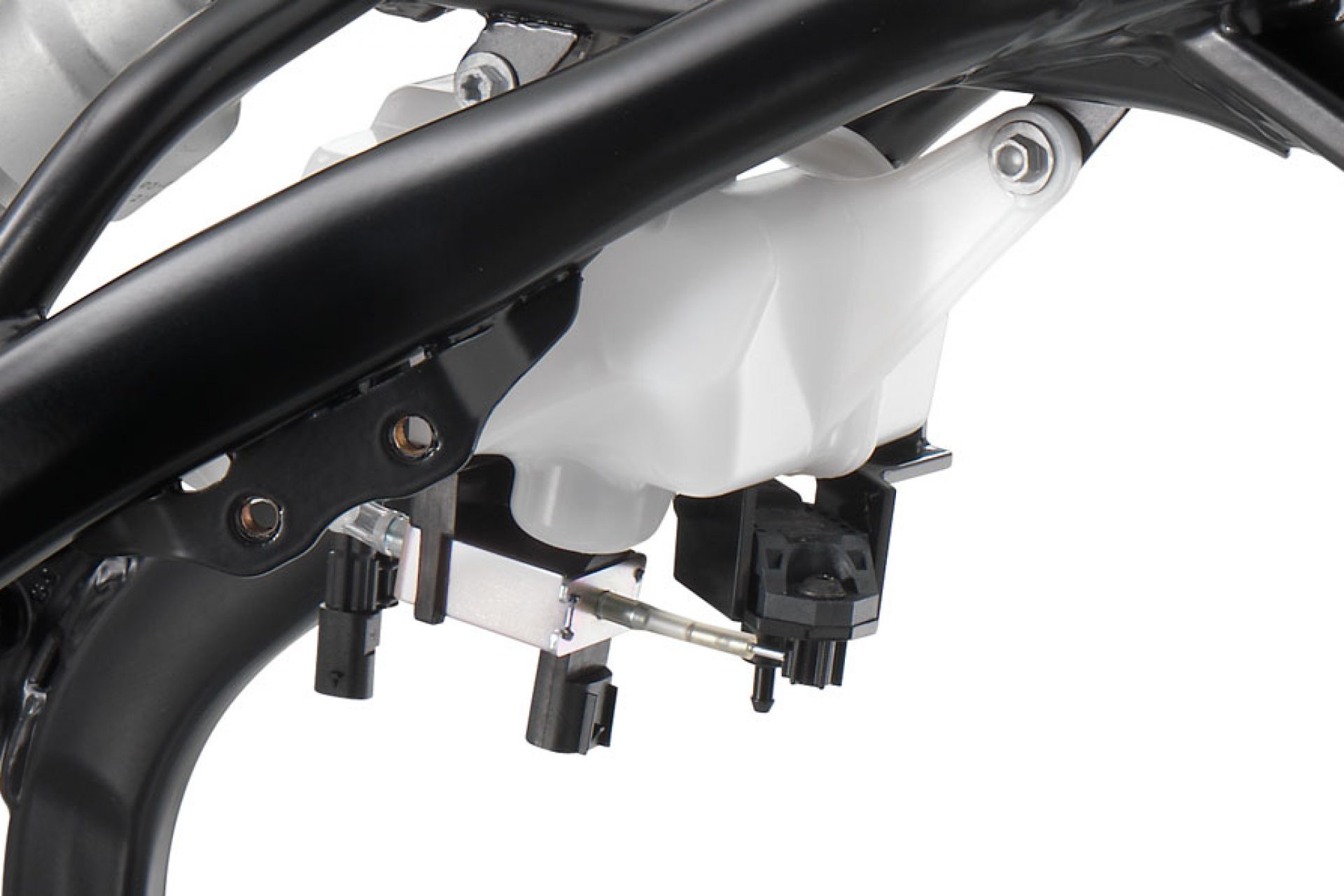 Pre-mixing 2-stroke fuel is a thing of the past for KTM EXC TPI owners. The 2020 models are fitted with a newly designed 2-stroke oil tank featuring reworked and more flexible mountings, which greatly improve durability and reliability. In addition, a mesh filter helps prevent dirt getting into the oil pump. Mounted below the oil […] 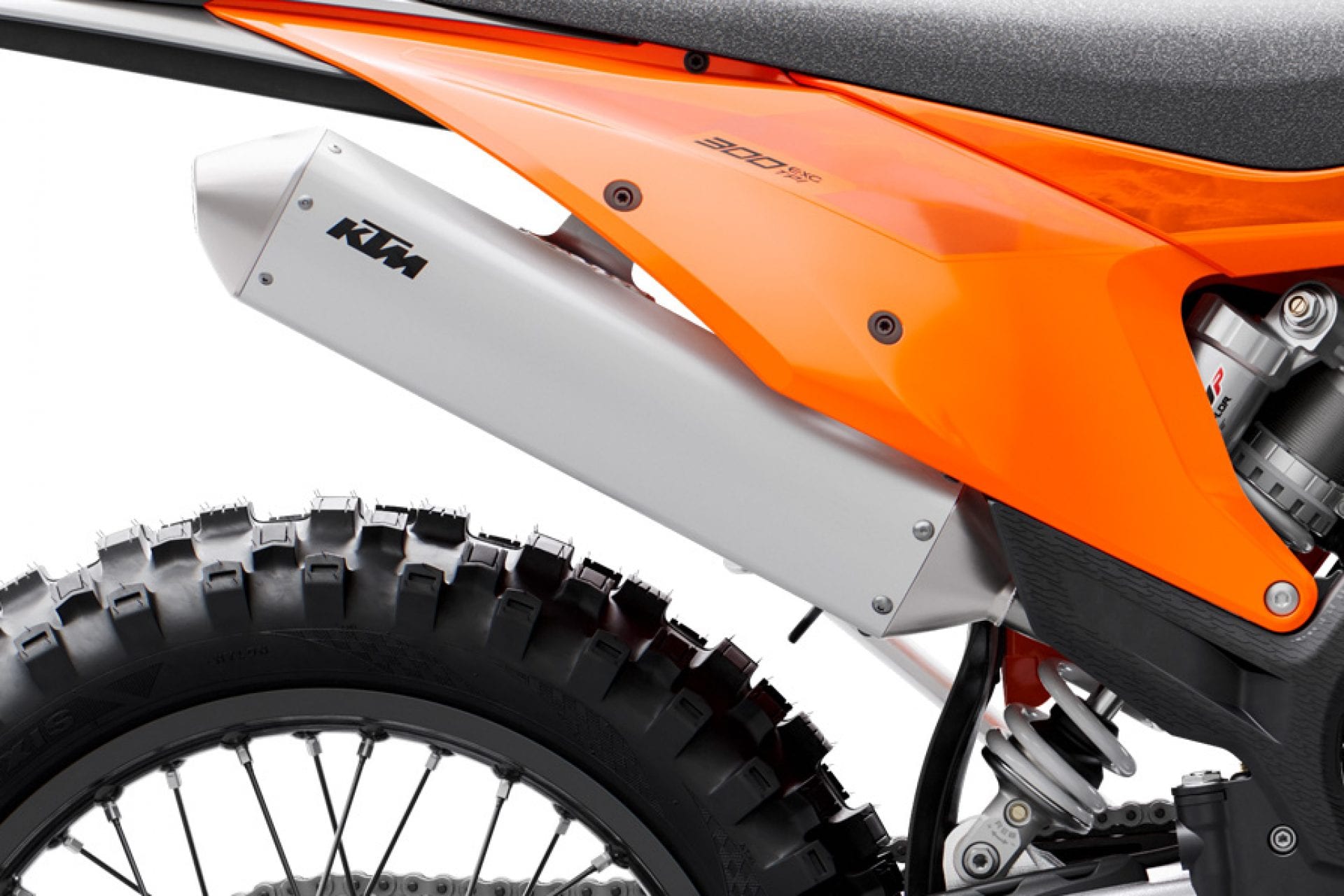 When it comes to improved power delivery and performance, the new exhaust plays a key role and packs a punch that is hard to beat. The 250 cc and 300 cc models feature new HD exhaust pipes (heavy-duty) made by using an innovative 3D stamping process which produces a ripped surface finish. This makes the […] 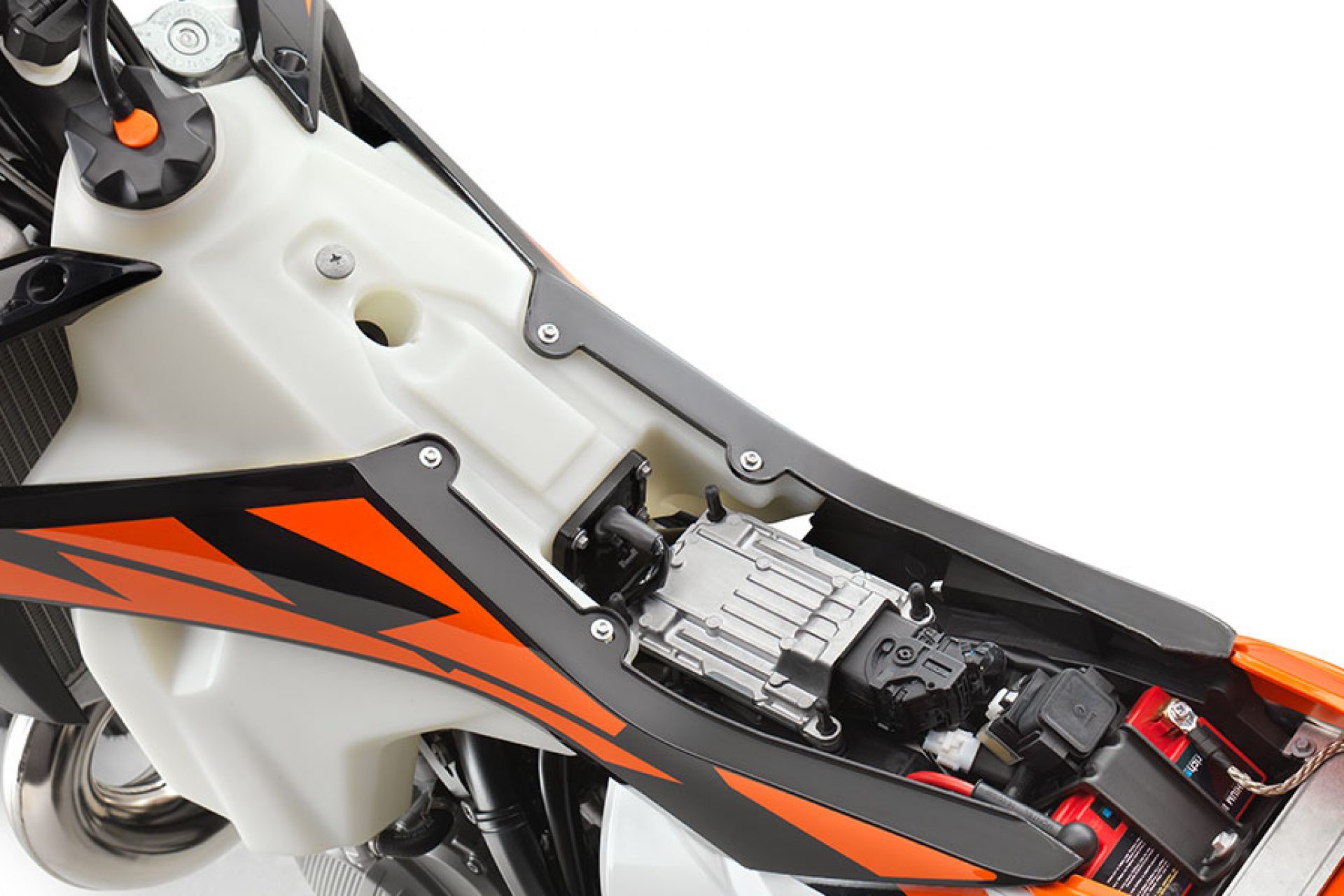 The engine management system (EMS) of the TPI models features a control unit located below the seat. The ECU defines the ignition timing and amount of fuel to inject is based on several sensor readings such as intake air pressure, throttle position and water temperature plus a new additional ambient air pressure sensor. Thanks to […] 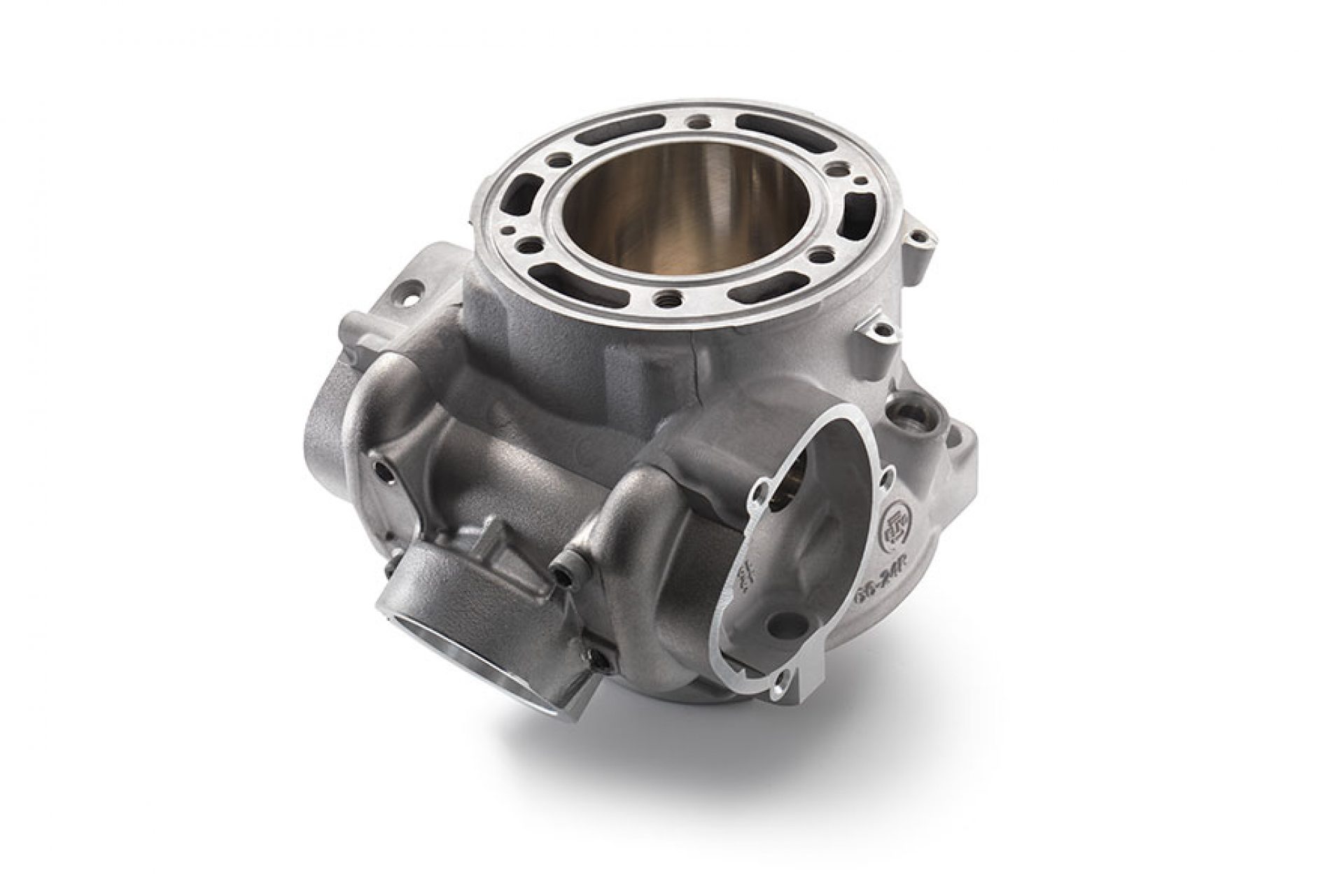 Inside the cylinder, with a bore of 78mm, thumps a reliable box-type piston made by CP. Its crown geometry is adapted perfectly to the high-compression combustion chamber (12.8:1), where its rigid structure and low weight maximize performance. Thanks to low oscillating masses, the engine revs freely with plenty of power. 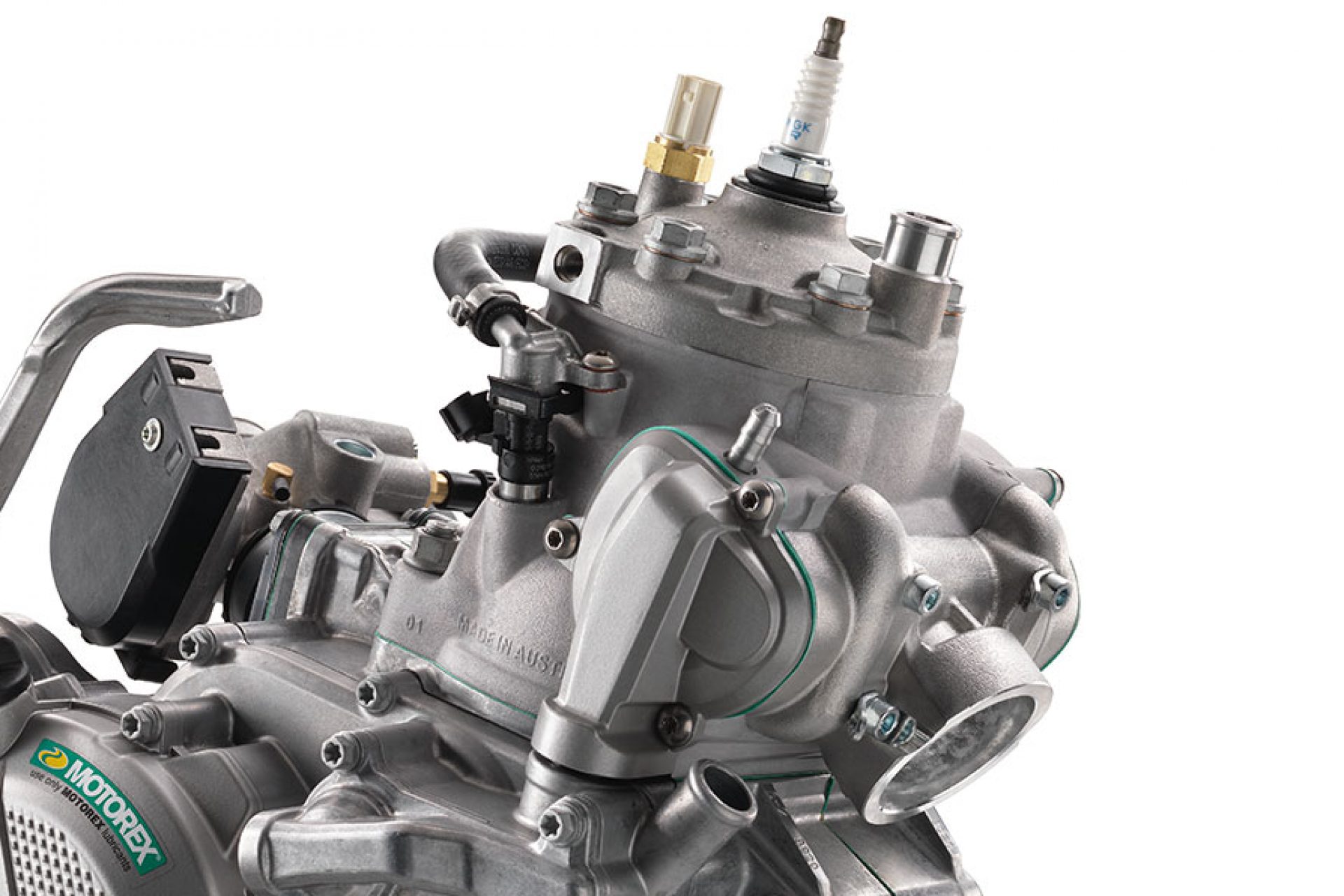 The KTM 300 EXC TPI cylinder has a bore of 78 mm and is fitted with a sophisticated power valve, which provides really smooth and controllable power characteristics. For the EFI application the cylinder features two lateral domes which hold the fuel injectors that supply fuel to the rear transfer ports. The downstream injection guarantees […] 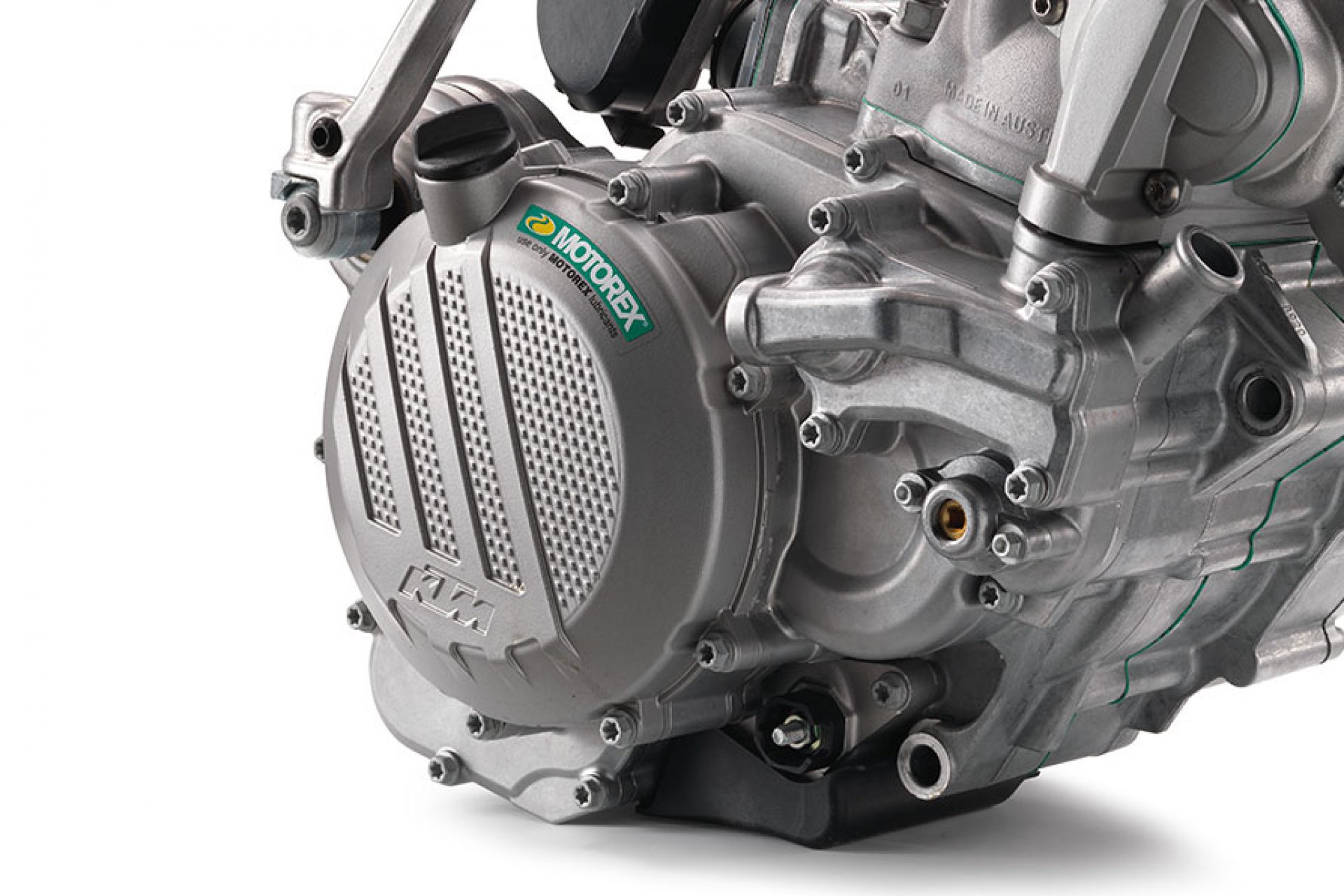 The compact engine cases are manufactured using a high pressure die-cast production process which helps with weight reduction, while retaining strength and durability. The design allows for optimal shaft arrangements close to the center of gravity, resulting in ideal mass centralization and easier ride-ability. Plus, the engine covers feature a smart surface structure which reduces […] 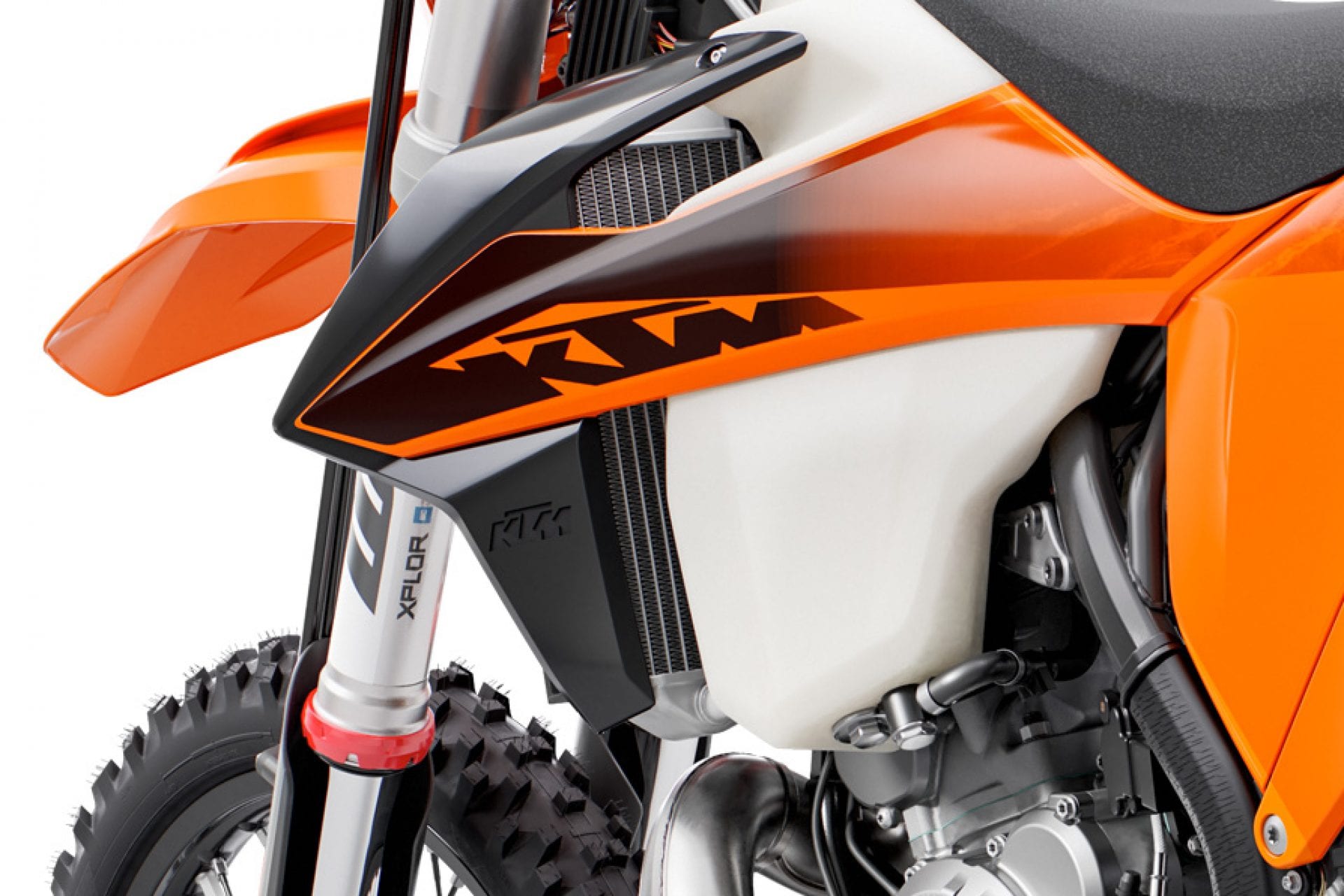 Maintaining the optimal engine temperature is crucial to ensuring consistent horsepower throughout the ride. The KTM 300 EXC TPI features newly designed radiators which are mounted 12 mm lower than the predecessors. This lowers the center of gravity and matches the design of the new shrouds perfectly, in order to achieve perfect ergonomics. By using […] 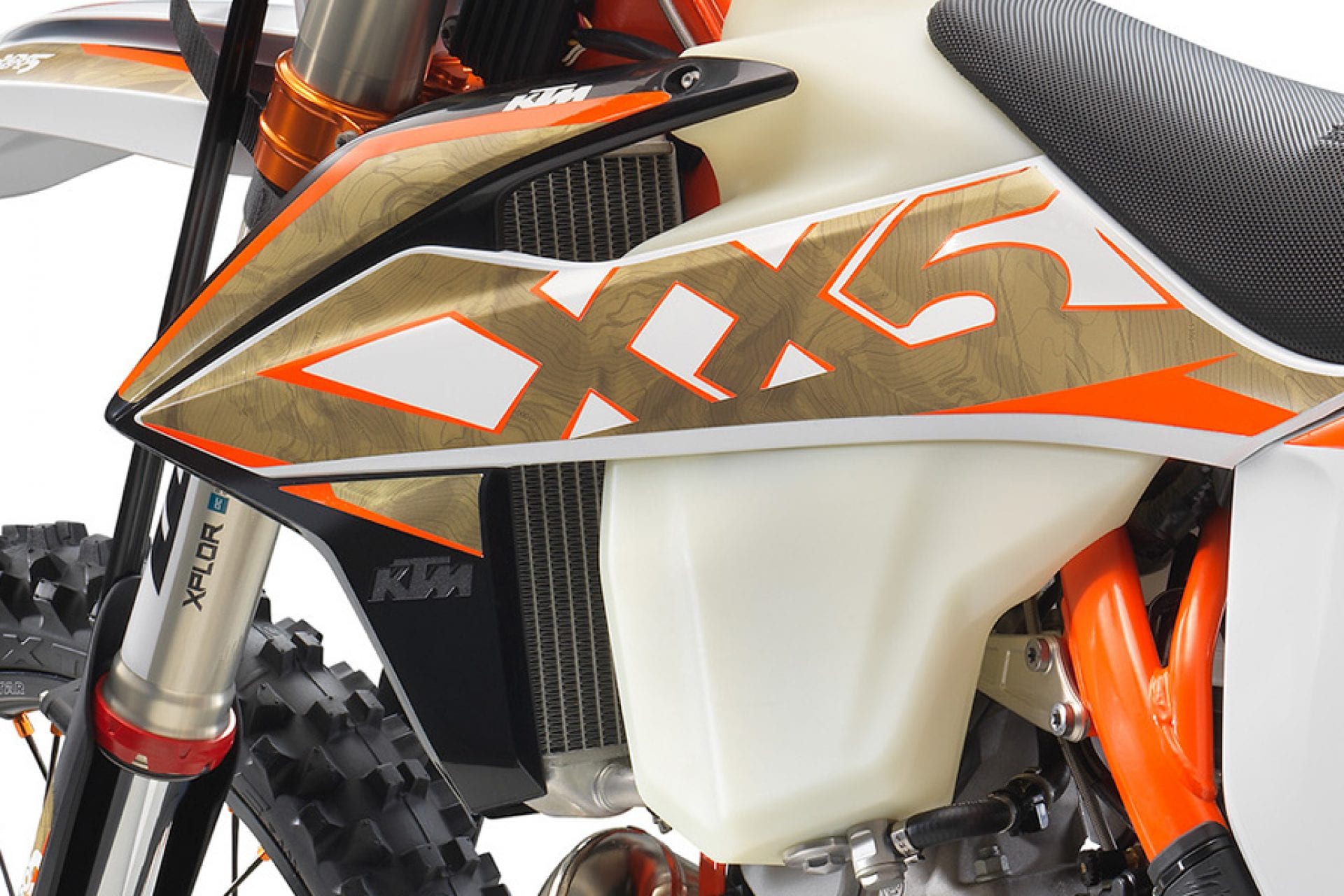 The KTM 300 EXC TPI ERZBERGRODEO features newly designed radiators, which are mounted 12 mm lower than previous 300 EXC models. This lowers the center of gravity and matches the design of the new shrouds perfectly, in order to achieve perfect ergonomics. Above that a reworked delta distributor, integrated into the frame triangle, features a […] 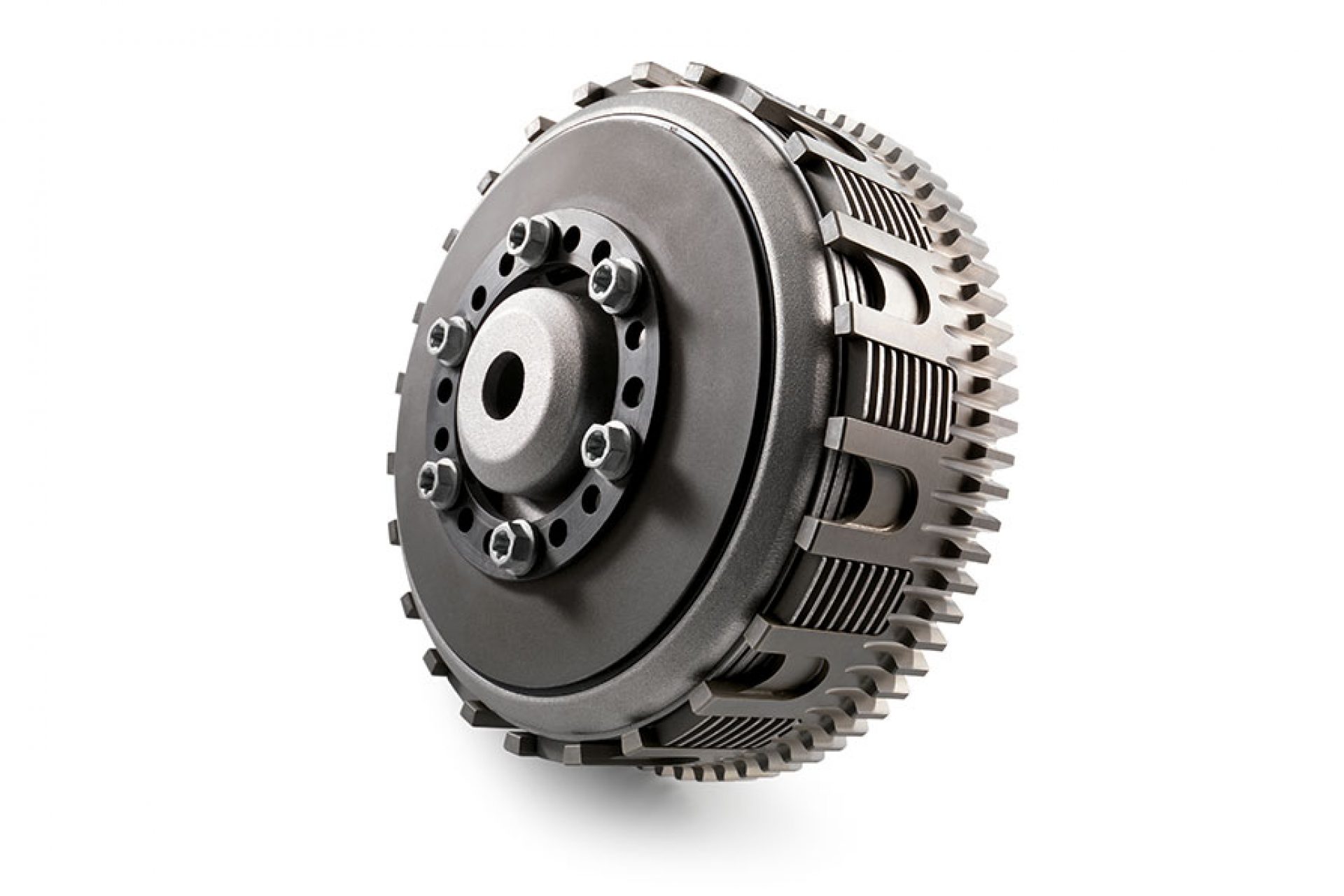 Say goodbye to numb feet and hands. This engine design allows the implementation of a lateral balancer shaft in order to keep the vibrations to a minimum. You know what that means: more comfort, less fatigue, bigger smiles.

When it comes to 2-stroke weaponry, keeping weight down is key. It should come as no surprise then that the KTM 300 EXC TPI is one of the lightest, slimmest and most agile enduro machines in its class. 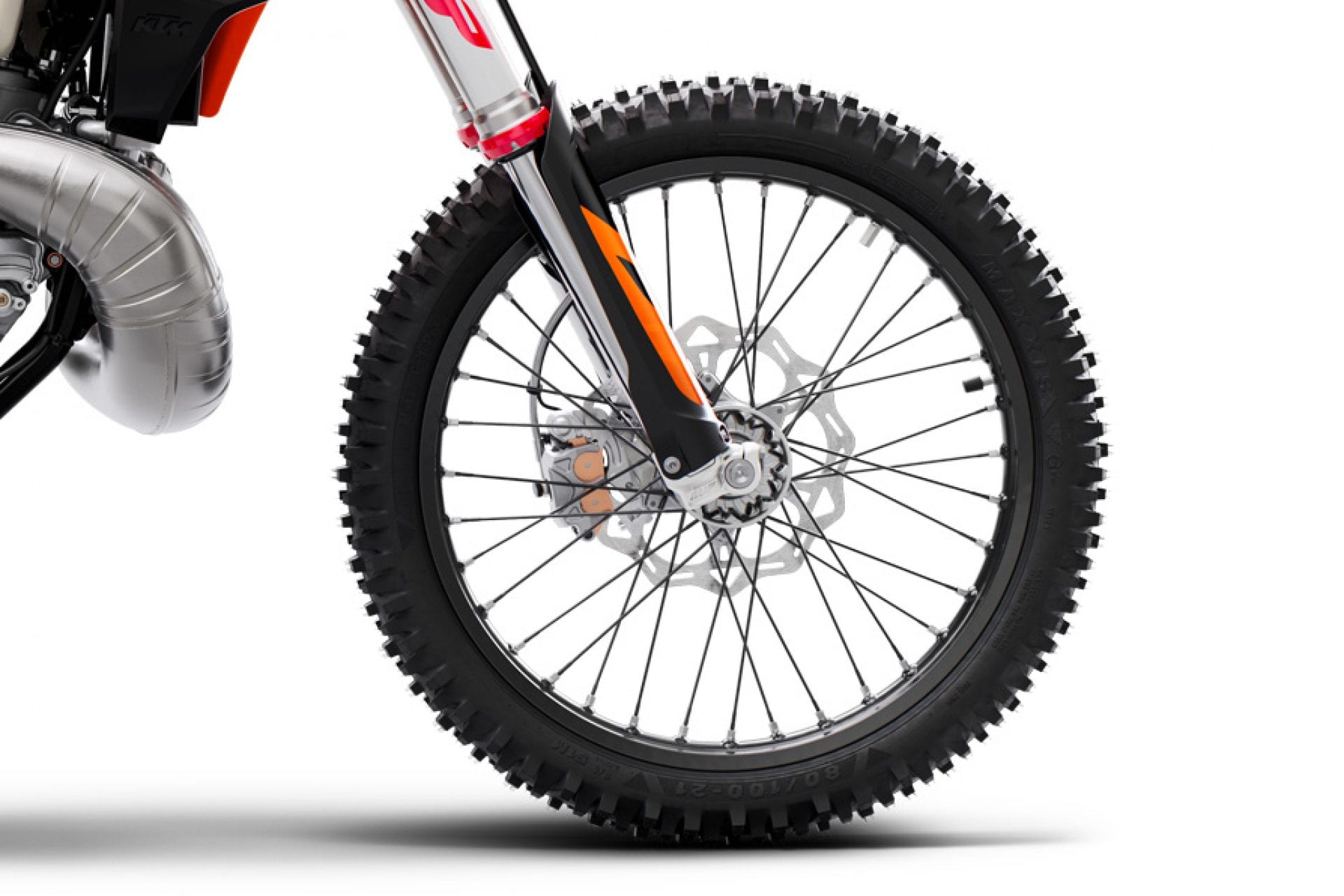 KTM uses lightweight, CNC-machined hubs and high-end GIANT rims on all Enduro models, guaranteeing maximum stability and minimum weight. For 2020, the aluminum spoke nipples feature a reworked design, which conveniently reduces the frequency with which the spokes need to be tightened. 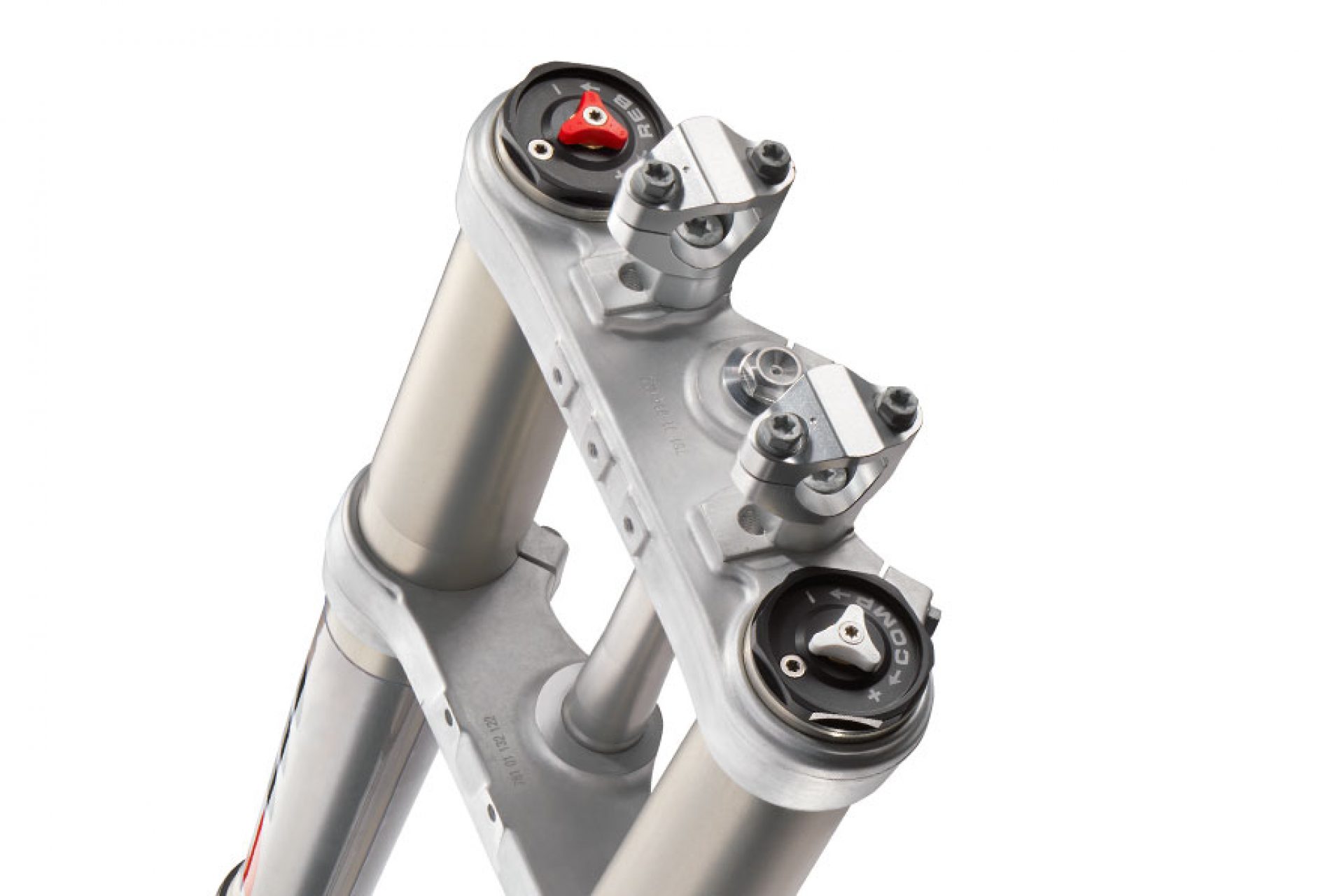 Fitted with forged triple clamps with an offset of 22mm, ensuring a solid grip of the fork and precise handling. The handlebar is adjustable forwards and backwards over 4 positions, so the EXC TPI will fit you like your favorite gloves. 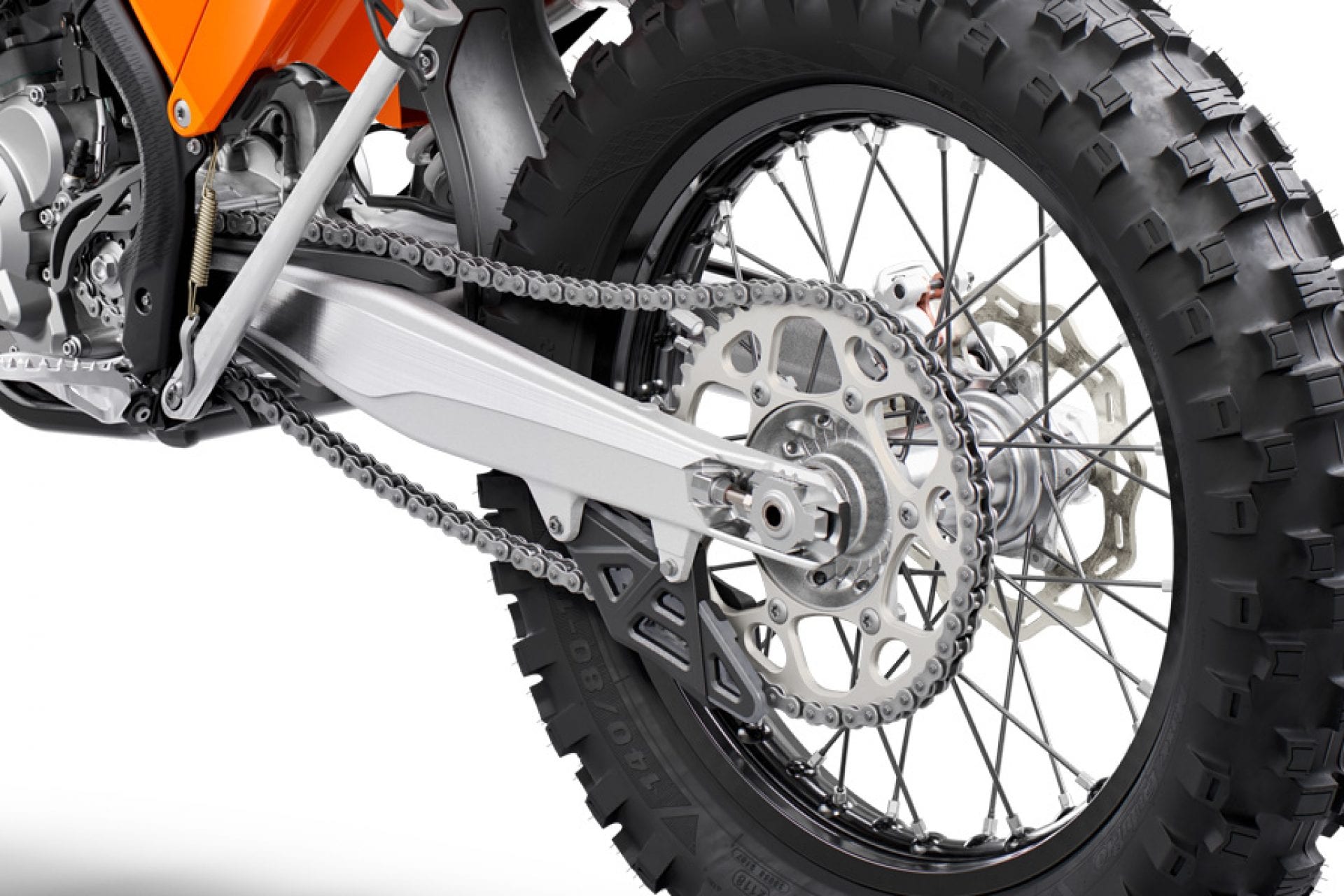 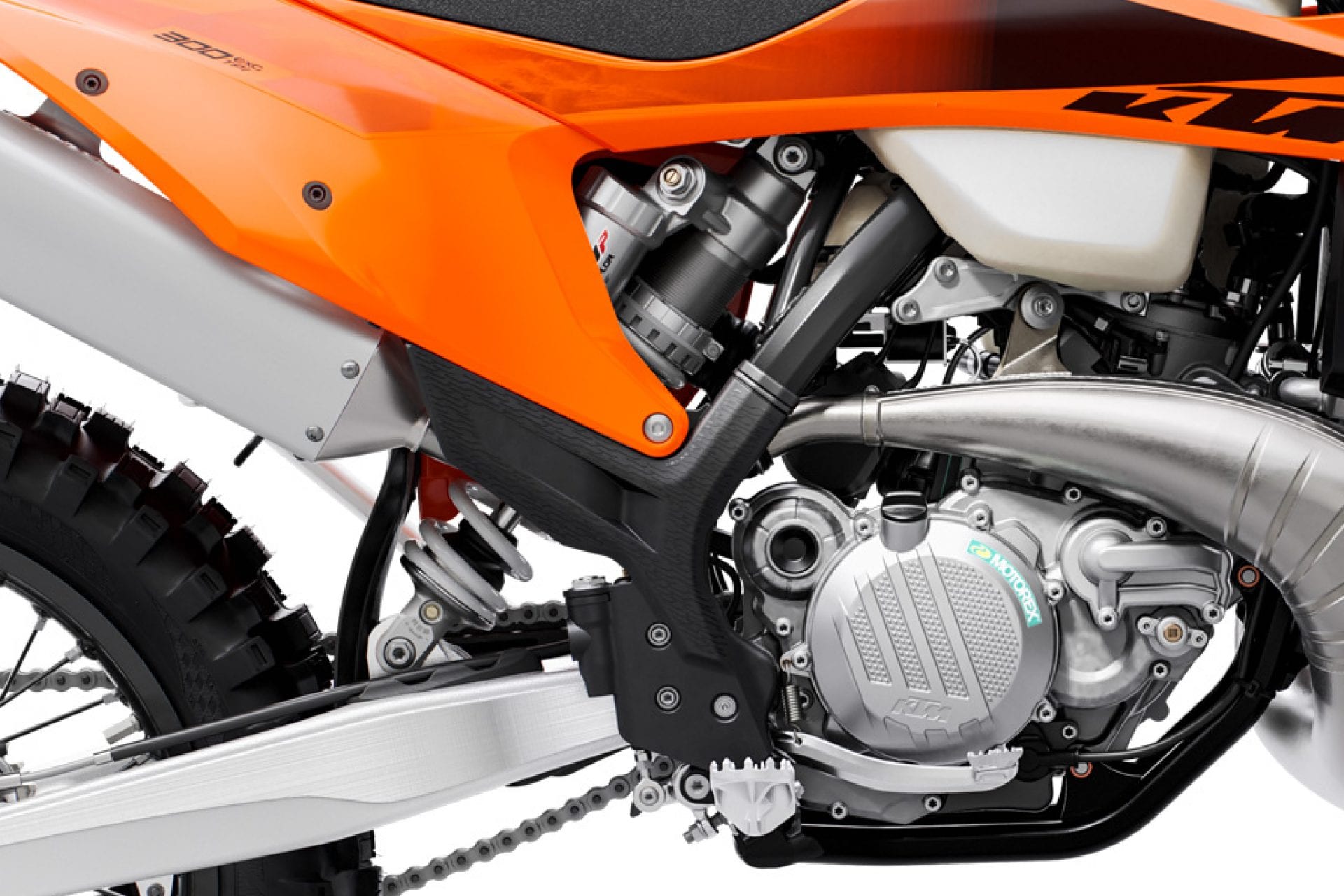 The WP XPLOR shock absorber is the key element on the proven PDS rear suspension design (progressive damping system), where the shock is directly linked to the swingarm without an additional linkage system. This keeps weight lower and reduces the chances of hooking on rocks. Optimal enduro-specific damping progression is achieved by using a second […] 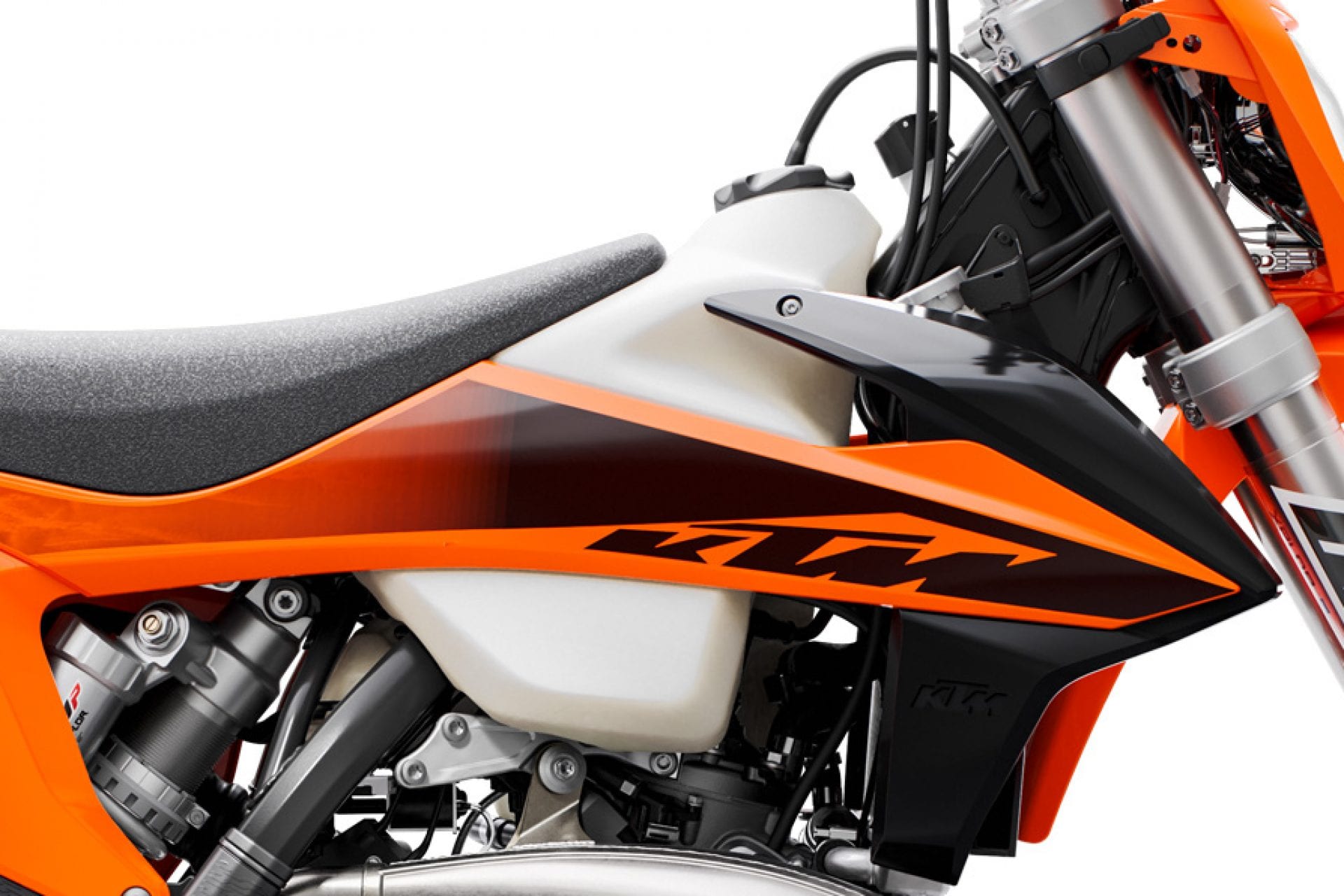 All models in the EXC range are fitted with newly designed lightweight polyethylene tanks improving the ergonomics. The ¼‐turn bayonet filler cap makes for quick and easy closure. Manufactured using see‐through plastic, you will always be able to see how much fuel remains at a glance. It is fitted with an integrated fuel pump system […] 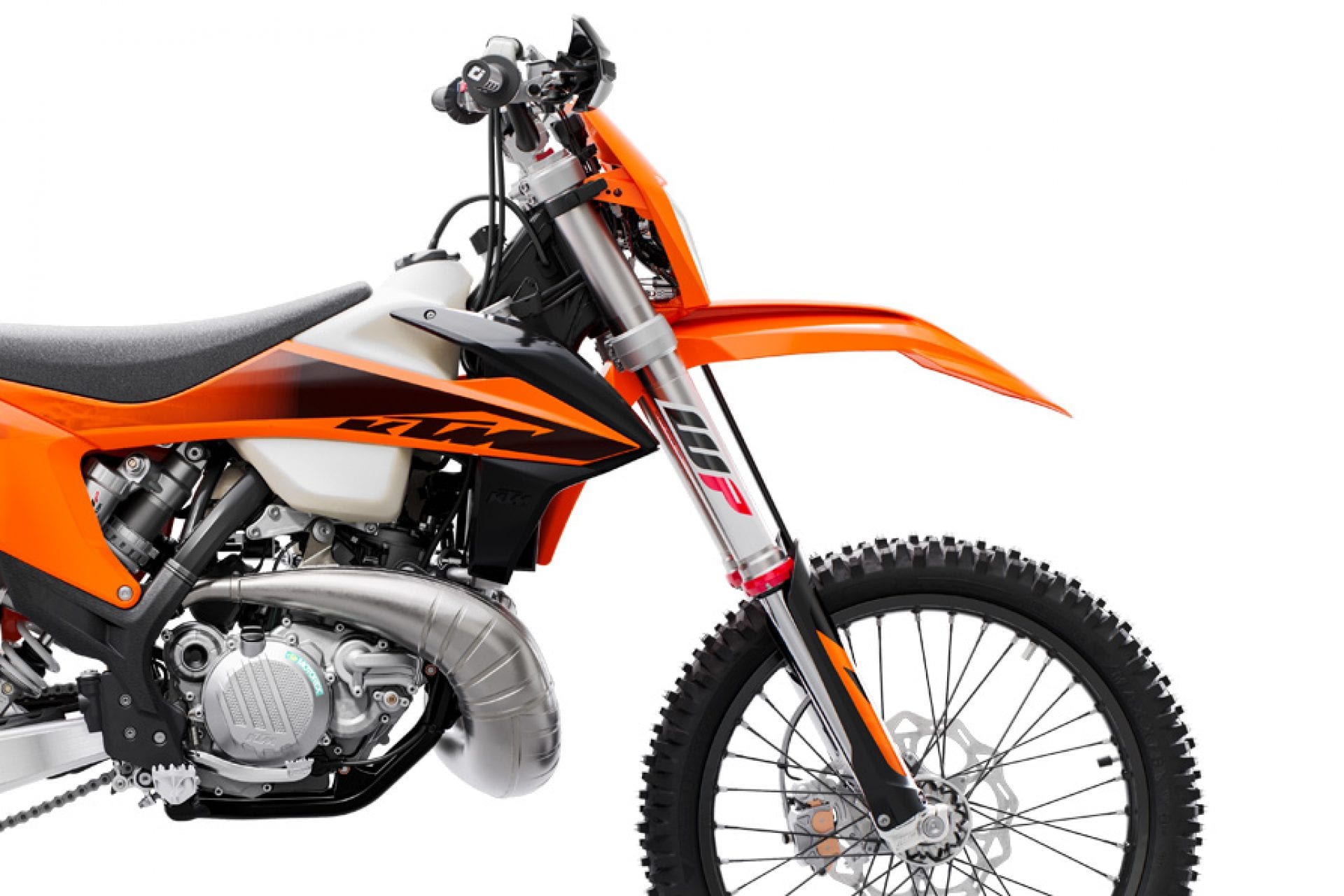 All EXC models are fitted with the latest 48 mm diameter WP XPLOR upside-down forks, featuring a split fork design developed by WP and KTM. While each side is fitted with springs, they have separate damping functions. Compression damping is on the left and the rebound on the right. Both can easily be adjusted via […] 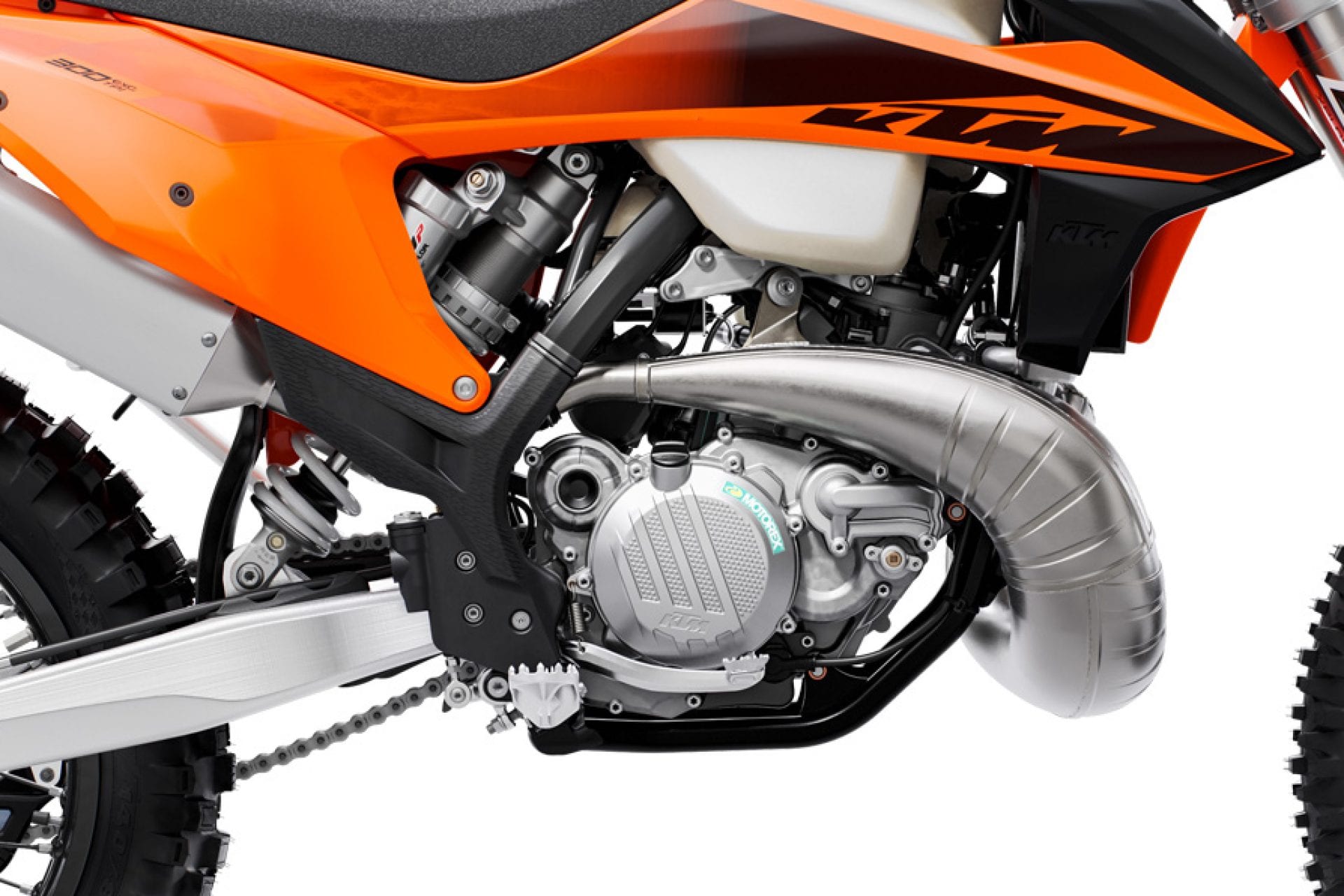 All EXC models feature new high-tech, lightweight chromoly steel frames. This includes hydro-formed elements produced by state-of-the-art robot welding. They retain their race-proven geometries, but by re-designing certain areas, the stiffness has been optimized, resulting in better feedback for the rider, playful handling and improved stability. The laterally attached engine head stays (the connection between […] 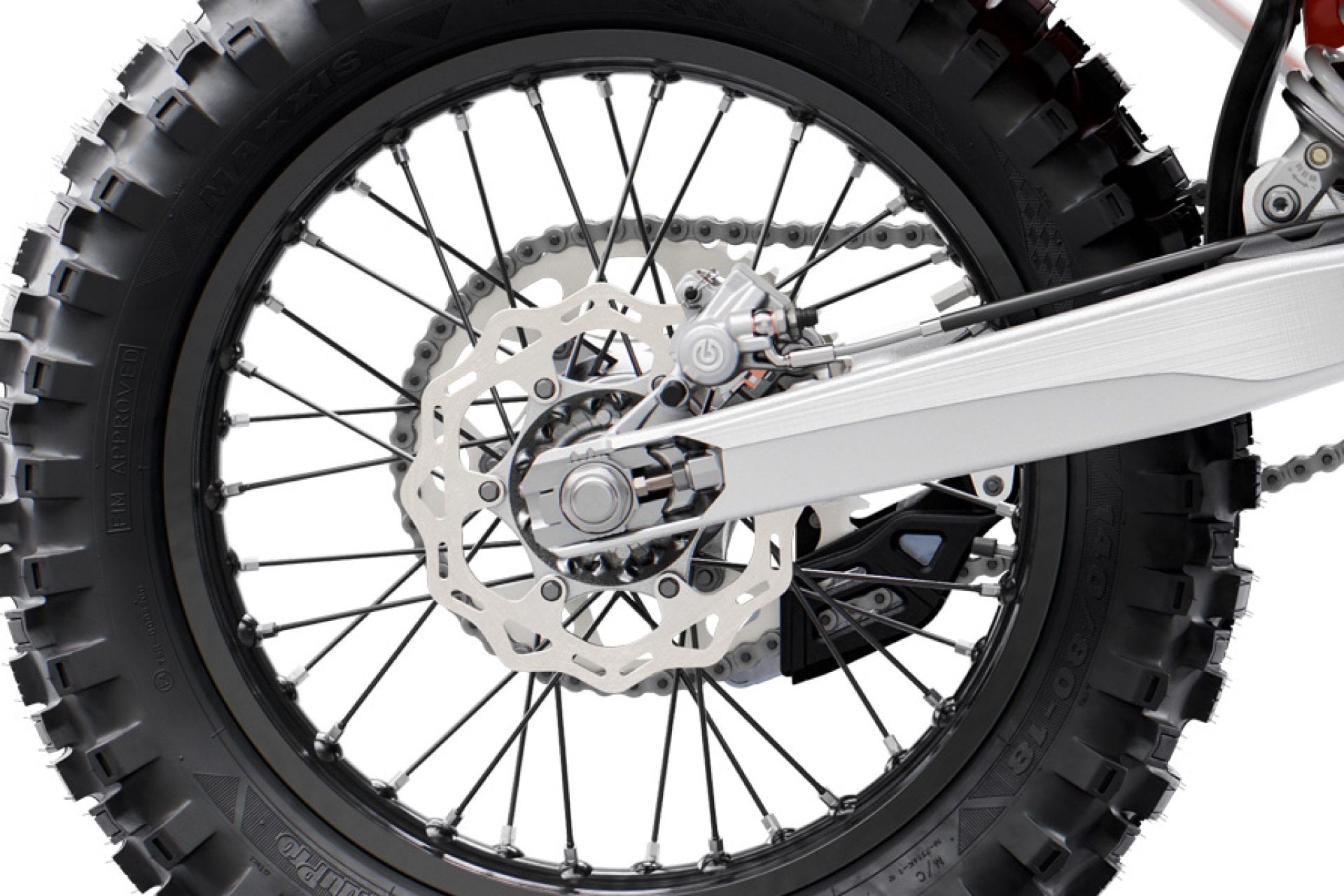 These high-tech Brembo brakes are combined with lightweight Wave brake discs. You couldn’t brake any harder or with better feel on an offroad motorcycle. 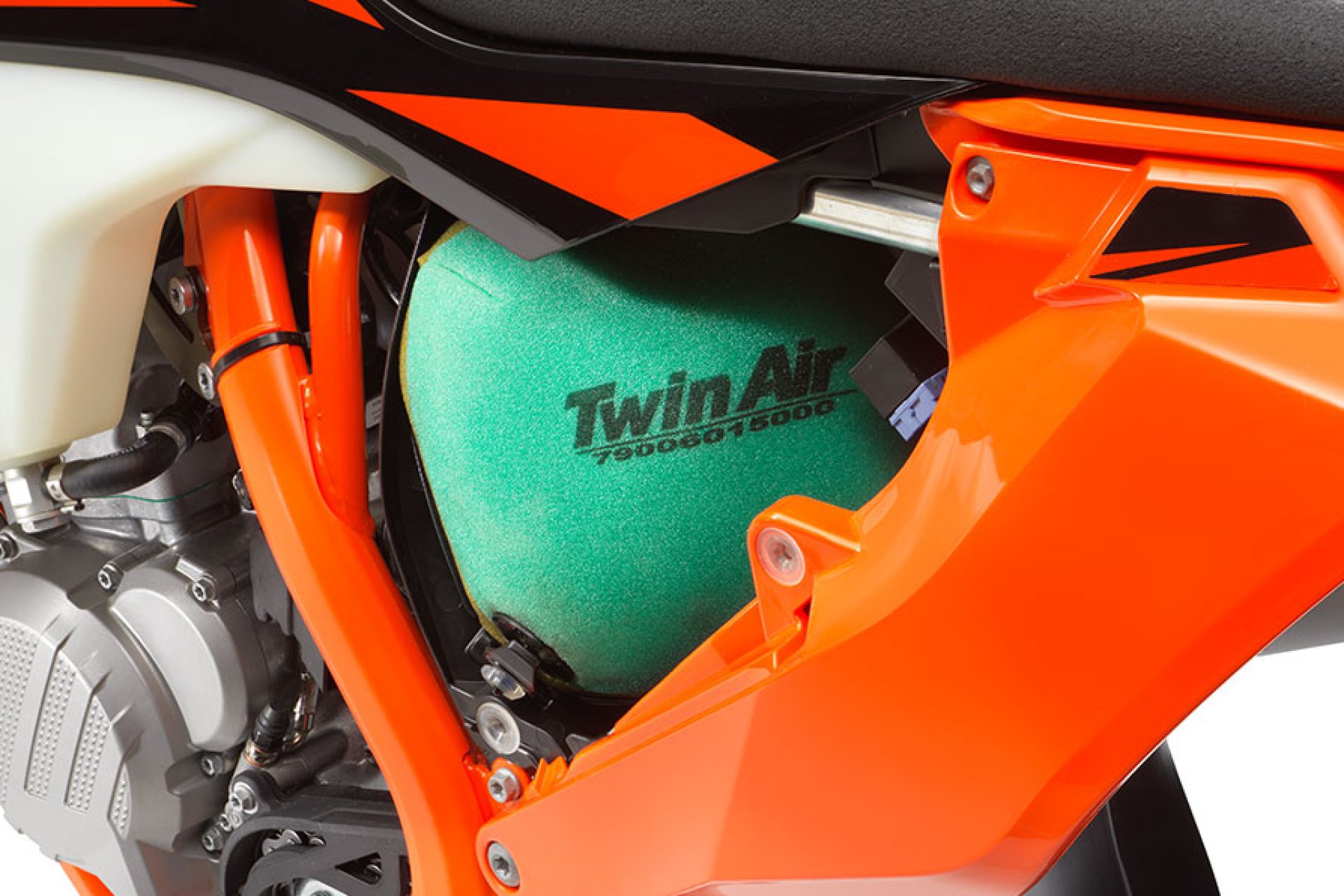 The new airbox on the KTM 300 EXC TPI has been completely reworked to ensure better flow dynamics, and together with new intake snorkels, results in optimal power and throttle response. Despite the obvious performance enhancements, the new design also offers maximum protection against soiling of the air filter. The large twin-air air filter is […]

Designed for complete harmony between rider and bike, KTM has exploited the knowledge from decades of race success to create perfect ergonomics on the KTM 300 EXC TPI. Maximum rider comfort and movement in all conditions is guaranteed. Additionally, the bike features a new tail light design which fits perfectly to the new shape of the rear fender and the number plate carrier. 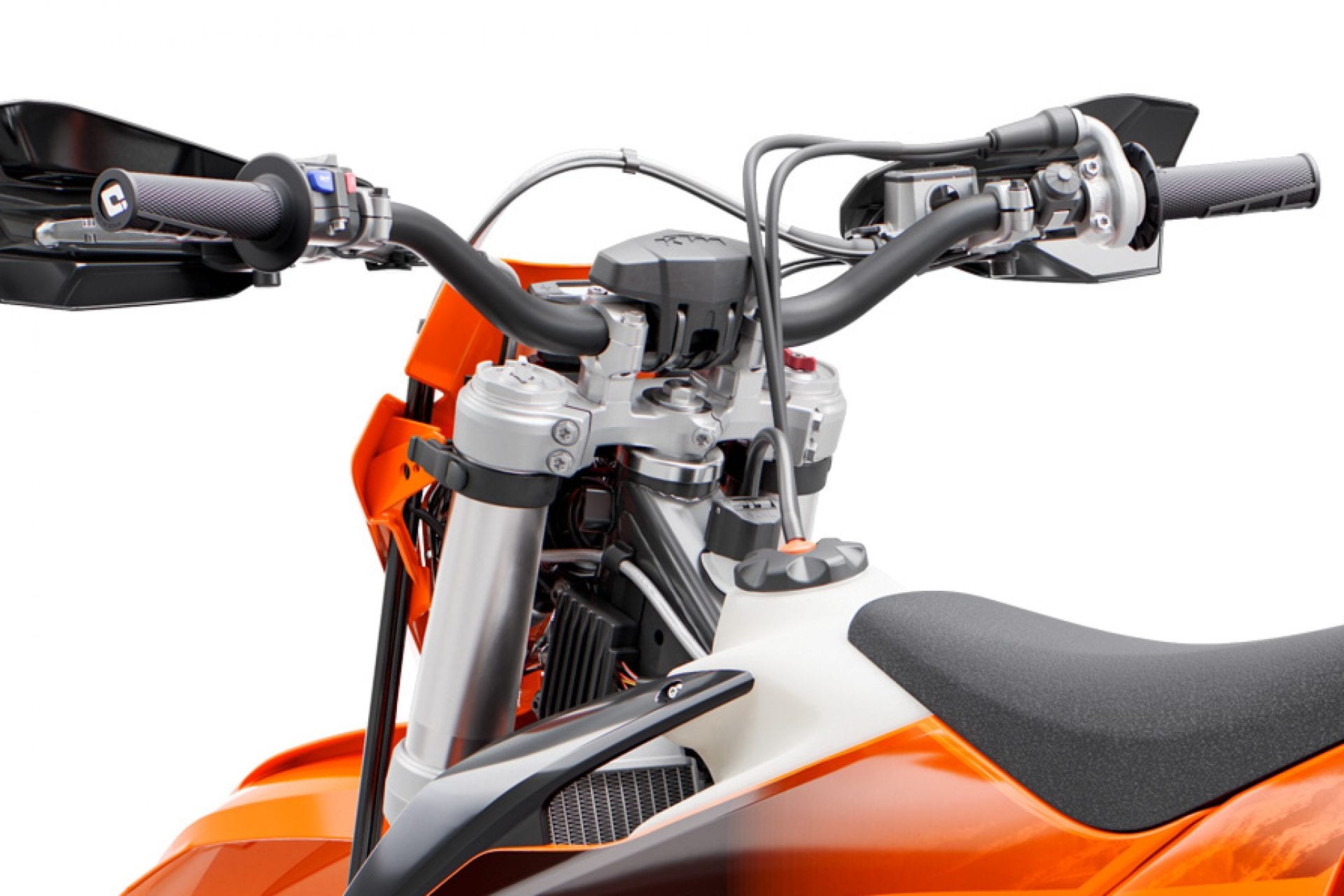 All KTM EXC models are equipped with the same high-strength aluminum tapered handlebar, made by NEKEN. The handlebar allows for four different positions. The handlebars come standard with an ODI vulcanized grip on the right side and a comfortable ODI lock-on grip, which does not require any wire or glue, on the left. Additionally, all […]

Sophisticated ´No Dirt´ footpegs prevent smudging up the pegs, even when digging in deep ruts. The pegs on the Enduro models are 6mm higher than the ones used on SX models, which benefits ground clearance. But you can swap them at will.

With input from KTM’s factory riders, as well as KTM R&D and Kiska Design, the new bodywork of the KTM 300 EXC TPI pushes the boundaries of progression even further. The result is a shape across the entire range, that achieves complete harmony between rider and bike. The main goal was to provide the optimal contact points that allow a rider maximum freedom of movement and improved handling. The front and rear fenders feature an intelligent I-beam design, guaranteeing maximum stability with the lowest possible weight. A new tail light design fits perfectly to the new shape of the rear fender and the number plate carrier. The new in-mold graphics confirm the high-performance intentions of this bike, as well as KTM’s never-ending quest for race-winning progression. 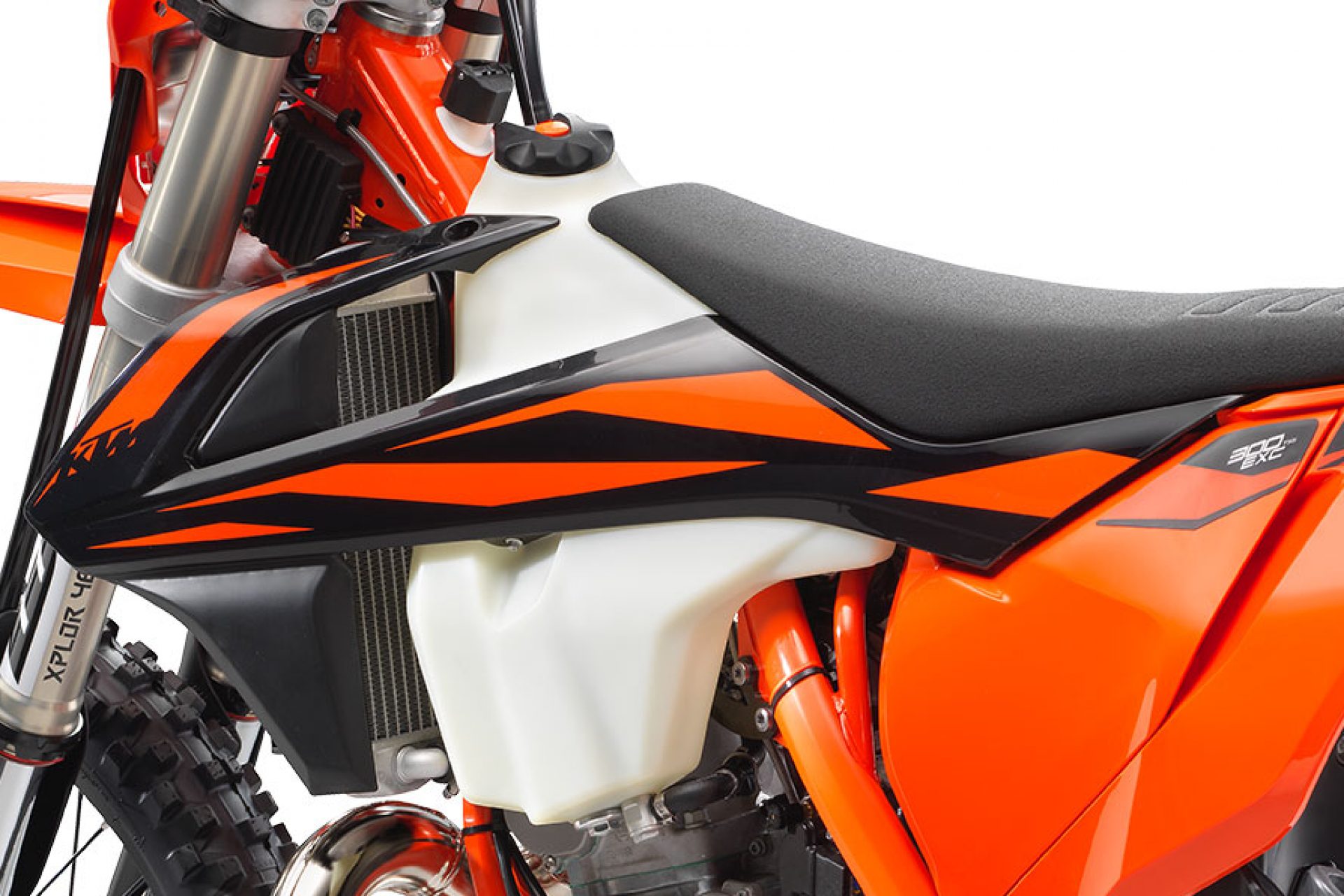 KTM EXC TPI models feature the most modern engine management system of any 2-stroke off-road motorcycle. By reading various sensor data inputs, such as intake and ambient air pressure, throttle valve position and water temperature, the control unit optimizes ignition timing and the amount of fuel to inject at all altitudes and conditions. 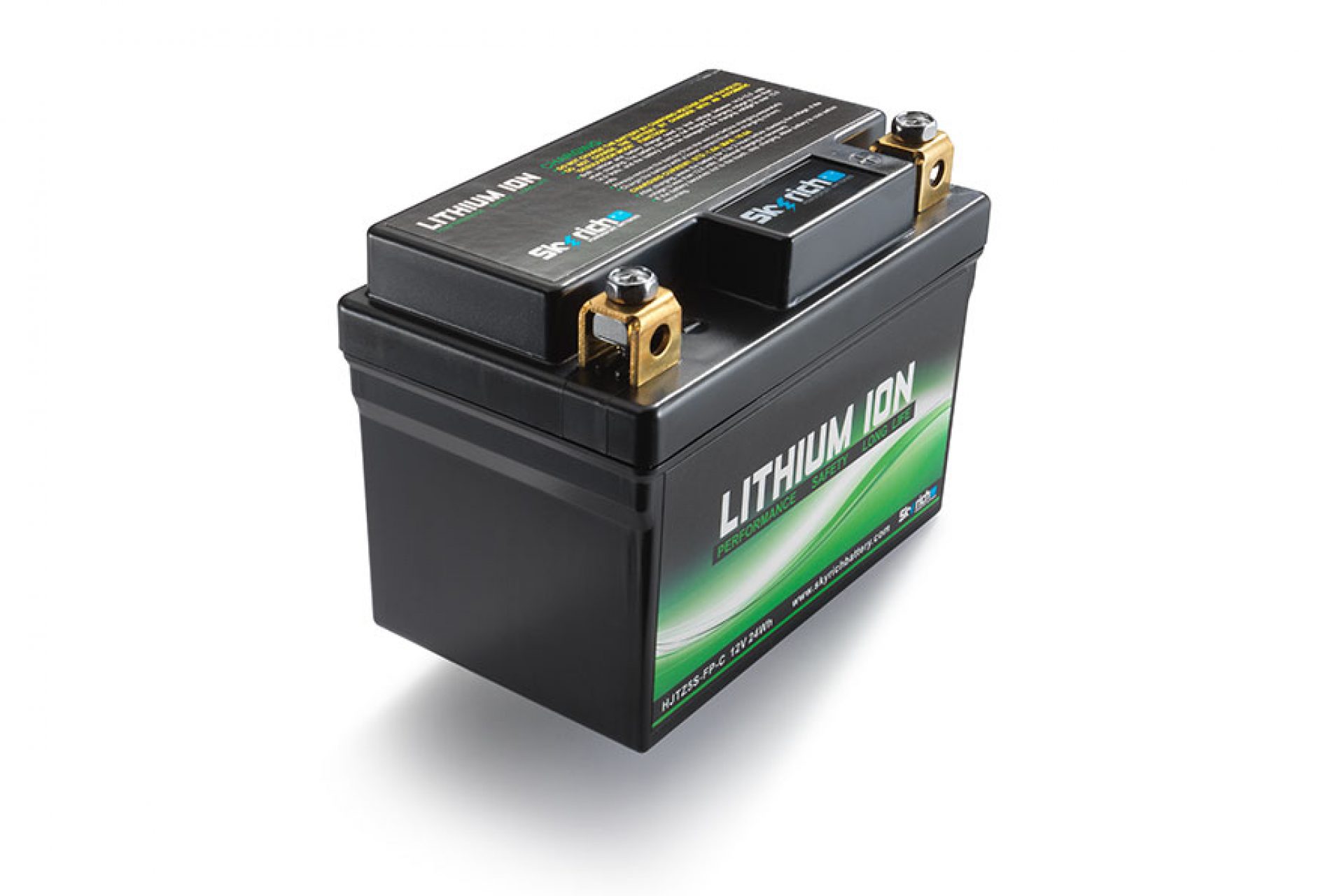 All engines are fitted with the proven electric starter, which is a major benefit for any offroad activity. It is powered by a super lightweight 2 ah lithium-ion starter battery which provides safe, reliable starting. A reworked wiring harness and revised packaging has most of the electrical components concentrated into a common area below the […] 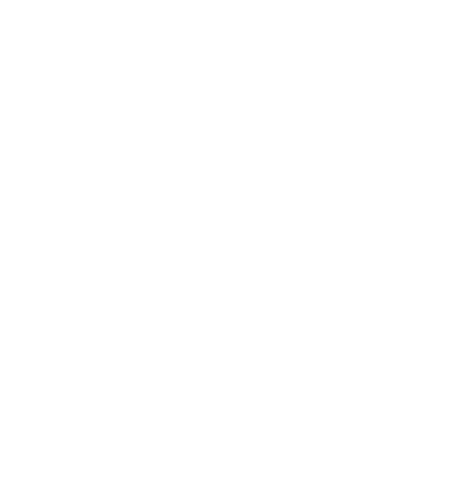 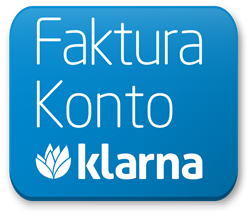